Scarlett and Black Widow co-star Florence Pugh are on the cover of Marie Claire – Winter 2020 with a all new amazing photoshoot and interview. I have added in the magazine cover and first set of outtakes from the shoot to the galley. I hope to have the digital scans soon and here is hoping more outtakes. 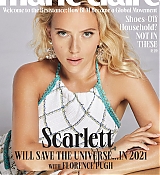 Marie Claire – The Call Once upon a weekday (or weekend, because what’s time anymore?), there was Scarlett Johansson, sipping, sipping, a margarita.

A call interrupted her cocktail hour. The word: The release of Black Widow, the sure-shot blockbuster starring Johansson and the magnetic Marvel newcomer Florence Pugh and directed by Cate Shortland—three power women collaborating on a power-women film, asserting their ascendance—was being delayed. It was deflating news, Johansson recalls, though not out of the blue.

Another margarita, you say? Yes, please, and thank you.

“I’d been talking to Kevin Feige”—the president of Marvel Studios—“about it, and our fellow producers, just trying to understand what the landscape was,” says Johansson, 36, with a little resignation now in that unmistakable voice but a little pragmatism too. “We’re all eager to get the movie out, but more important than anything, everybody wants the experience to feel safe, to have people be able to really feel confident about sitting in an enclosed theater.”

We’re on a conference call, because that’s what you do these days—no lunch. That or Zoom, which we did a few weeks ago. Pugh, 24, is with us on the line. Also resigned, also pragmatic. She had just flown from London back to L.A., where she lives, when she got the call.

“I think I probably had a hunch,” she says. “It seemed to me all the fun of summer, and everybody being outside and finally having some relaxed rules, caught up with everyone, obviously, because of the virus. I’m sad that people don’t get to watch it for another half year, but I wasn’t majorly upset because it’s important to look after people right now.”

What they’re saying is, the postponement of a superhero film isn’t the apocalypse. Not this abysmal year nor any other. But ain’t it the pits? Who wouldn’t want to be sitting in a darkened theater right now, loaded with a bucket of fake-buttered popcorn, big soda, sinking into a seat as heart-thumping Marvel action unfolds on the screen?

We first chatted over computer screens. Pugh, after many months grounded by COVID-19, had traveled to London and Zoomed from her office, a dimly lit room with framed art hung high on the walls and opened boxes for a Casio key-board and stand—check her YouTube for her acoustic-guitar performances as Flossie Rose—perched on a cabinet.

Johansson was a few minutes late, on account of picking up her daughter from a rained-out day camp, and joined the call from her New York home. It was evening in London, and Pugh, who wore a white T-shirt that read “Love” and several thin necklaces, had poured herself a generous glass of red wine.

When Scarlett appeared on the call, Pugh yelped, “Oh my goodness, there she is!”

Johansson, dressed in athleisure and fresh faced, smiled back. And for a few minutes, the two stars—one of whom’s $56 million salary last year reportedly made her the highest paid actress in the world—seemed no more than two good friends catching up. They teased each other about their choice of Zoom settings. Johansson chose her bedroom and was backdropped by a tufted suede headboard and wallpaper patterned with birds and leaves.

“I like to switch up. Keep people guessing. Make it look like I’ve gone somewhere,” she said. “When I’ve gone nowhere, obviously.”

To Read The Rest Of The Interview Click On The Link Up Top. 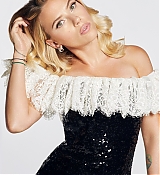 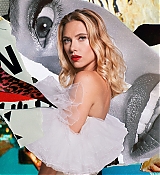 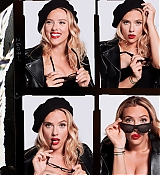 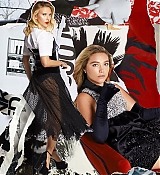