Vanity Fair – Even for the smartest and most talented actors, there are far more ways for a movie to fall short than succeed, so it’s a rare moment when project after project clicks seamlessly into place. Right now, Scarlett Johansson is clearly having such a moment. Earlier in the year, she played a pivotal role in what has become the highest-grossing movie of all time worldwide, Avengers: Endgame, and filming has just wrapped for the standalone movie about her character, Black Widow, scheduled for release in May. Meanwhile, her performances in two recent, smaller-scale movies, the searing relationship drama Marriage Story and the extraordinary, off-kilter Nazi-era comedy Jojo Rabbit, are drawing sustained acclaim; for the former she is widely considered a contender for best actress.

All of which seems to leave Johansson quietly proud, but also uneasy.

“I worked really hard for a really long time,” she says, semi-supine on a sofa in a New York photo studio at the end of another long day. “So maybe this is the result of that.” There’s a carefulness about Johansson as she says this, not the kind that implies insecurity or a lack of self-belief, more that she is used to being someone for whom it is almost always too soon to really celebrate. “I definitely am the type of person who’s always waiting for the other shoe to drop,” she reflects. “But I’m learning to change that habit.”

Johansson is 35, though, as she points out, “I’ve been working for, I don’t know, 25 years or something.” She was 9 when she filmed her first movie role, in North; by 13 she was at the center of The Horse Whisperer; at 18 a breakthrough role in Lost in Translation launched her adult career. Not everything has always come easily: “Over that time, my feelings towards work, it’s ebbed and flowed. At times I felt like I couldn’t get anything that was substantial or that felt challenging to me.”

Recently, that has been less of a problem, something she relates, at least in part, to the change of priorities that came with becoming a mother. (Her daughter, Rose, is five.) “Now I have a child…not that I’m not career-driven now, but I guess I’ve been driven by other sides of my career in the past,” she says. “Maybe I was more concerned with a certain kind of visibility or exposure. And now I’m not as worried about that stuff. I’m in a good phase in my career where I’m able to actually wait for stuff that’s right.”

Johansson says that it was obvious that Jojo Rabbit was one of these from the moment she read what director Taika Waititi had written. “The script was fantastic. It was a gem. I mean: perfect. Obviously I’ve read plenty of scripts over these 20-whatever years, and when something is that tight and surprising and touching and unusual…I was, like, ‘This is really special.’ And I felt Taika was capable of making it the way that it deserved to be made.”

Likewise, it was immediately obvious how she should play her character, a mother caught between the Nazi-youth mania possessing her young son and the dictates of her conscience. “Rosie just came off the page,” says Johansson. “In my mind she was this warm, cozy character, this lovable safe place. I wanted her to feel like a safe place, a loving and vivacious person in the middle of her life, so that you really felt the profound loss when she’s not there. I fell in love with her. I just had to say the words because I was in love with her.”
Click on the link at the top to read the full interview 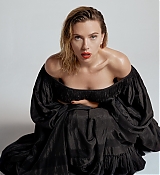 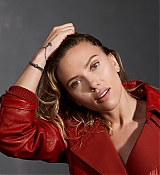 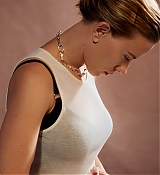 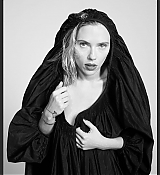 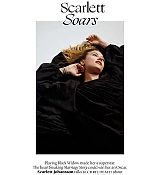 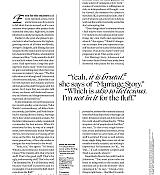 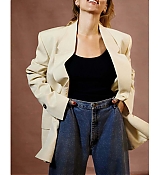 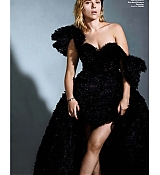