Welcome to SCARLETT JOHANSSON FAN, your online resource dedicated to the two time Oscar Nominated actress SCARLETT JOHANSSON. You may know Scarlett from her Oscar nominated roles in "JOJO RABBIT", "MARRIAGE STORY" and her 11 years as Natasha Romanoff / Black Widow in the "MARVEL CINEMATIC UNIVERSE" and her own movie "BLACK WIDOW". It is our aim to bring you all the latest news, photos, information and much more on Scarlett's career. We hope you enjoy your stay!
Abby / July 23rd, 2019
‘Avengers’ star Scarlett Johansson overjoyed she can finally reveal ‘Black Widow’ standalone film
Black Widow Gallery Updates Interviews

GMA – Scarlett Johansson has embodied the bravery and empowerment that her Marvel character Black Widow has shown on screen for almost a decade.

Now, the Oscar-nominated actress can finally admit that she’s getting her own standalone film in May.

“Can I finally say that?” she told ABC News’ Adrienne Bankert in an interview that was shot at Comic-Con International: San Diego this weekend and aired Monday on “GMA.”

In the revealing interview, the actress talked about her defining sacrifice in “Avengers: Endgame” and how she feels like this is icing for her Marvel Cinematic Universe career.

“I would’ve been happy to, you know, to end it at ‘Endgame’ and walk away,” she said. “I was proud of the work that we had all done together, and that the only reason to do this standalone would be to elevate the genre in some way. And so hopefully, we will have.”

Speaking of that sacrifice, it’s still unknown if this film will be a prequel or some kind of resurrection, but the actress is teasing a little of what fans can expect. She also shared it’s currently in production.

“You actually get to all the questions you may have had about this mysterious character and who she is,” Johansson said. “Where she comes from, her makeup, who she knows, like, what makes her her? What are the secrets of the past that haunt her?”

Johansson will follow in the footsteps of Brie Larson’s “Captain Marvel” as the second female hero to lead her own MCU film.

“It’s a little bit scary not having the kind of cushion of my fellow Avengers around,” she went on. “You kind of feel like you put yourself out there in a different way because the character stands on her own.” 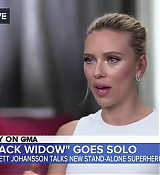 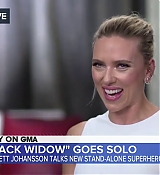 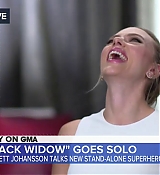 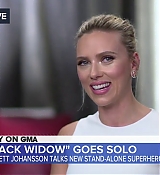