Scarlett Johansson has played an AI, aliens, and psychokinetic superhumans – but in Ghost In The Shell, the live-action adaptation of the cult manga franchise, she plays a cyborg with a human soul. And as you can see from our exclusive image, a cyborg with a healthy taste in cyberpunk leather and futuristic motorcycles. Take a look below, and click to embiggen.

Johansson plays The Major, and as she explains to us in the new issue of Empire, on sale this week, she’s at something of an existential crossroads when we meet her. “She’s living a unique experience,” the star explains to us from the film’s set, “as somebody who has an idea of who she thinks she was, and then who she is now, and the person that she feels she is, this sort of gnawing feeling she has in her ghost. Being able to play those three sides: the ego, the superego and the id… That was pretty enticing.”

This is just a sneak preview of six exhaustive pages of coverage on Rupert Sanders’ blockbuster adaptation – be sure to pick up the new issue of Empire, on sale from Thursday 23 February, to read the full on-set report. Want to get your copy before anyone else, for less than the cover price, with exclusive covers to boot? 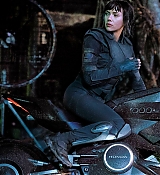 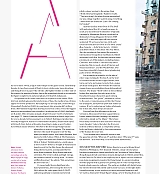 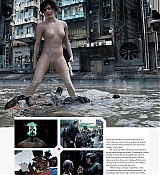 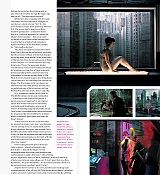