Welcome to SCARLETT JOHANSSON FAN, your online resource dedicated to the two time Oscar Nominated actress SCARLETT JOHANSSON. You may know Scarlett from her Oscar nominated roles in "JOJO RABBIT", "MARRIAGE STORY" and her 11 years as Natasha Romanoff / Black Widow in the "MARVEL CINEMATIC UNIVERSE" and her own movie "BLACK WIDOW". It is our aim to bring you all the latest news, photos, information and much more on Scarlett's career. We hope you enjoy your stay!
Abby / June 4th, 2017
Scarlett Johansson: “There’s No Reason We Shouldn’t Be Talking About Our Reproductive Rights.”
Articles & Interview 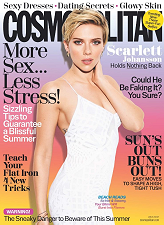 Cosmopolitan’s July cover star explains the importance of speaking up for what you believe in.

On sharing her political beliefs:
“Whenever you speak publicly, it’s always a risk, right? Maybe you’ll lose some followers. But if you have something to say, it can be really impactful. I hope my daughter finds her voice and feels like she can engage anyone in any number of topics. I grew up in an environment that encouraged activism, so I never thought about the effect that it would have on my career at any stage. But I know it’s a luxury, and not everybody has that luxury.”

On advocating for Planned Parenthood:
“I hope it normalizes the conversation. There’s no reason we shouldn’t be talking about our reproductive rights. They’re something we have to fight for and continue to protect. There’s nothing icky about talking about that stuff. Of course, it’s private and it’s your body, but we should take the stigma away.”

On Ivanka Trump’s ‘quiet’ activism:
“I’m not asking her to come out and talk about something she doesn’t believe in…I know it’s complicated. It’s her father. Can you imagine? Maybe she’s afraid she’ll be abandoned. It’s hard to put yourself in somebody’s position like that. But how do you move the needle in one direction or the other? Hopefully, she’ll make a courageous choice and stand up for what she believes in — whatever that might happen to be.”