To go with what should have been the lead up to Black Widow Barbie have announced two limited edition Black Widow barbie’s one in the white suite and one in the Black suite. The white suite barbie is a barbie.com exclusive only and the black one I have found on Amazone.com so I would guess you can get it more places both are the same price at $50 each and you can get the white one Here and black one Here. 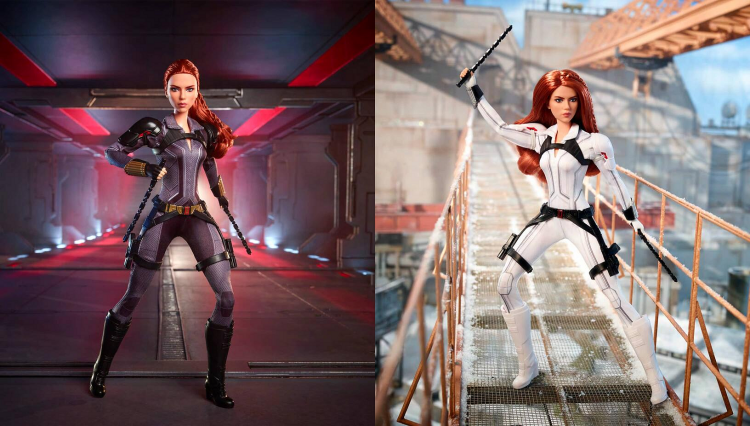 “It was so exciting to bring the character of Black Widow to life for her upcoming 2020 solo movie,” said designer Bill Greening. “The doll really captures the likeness of the hero and the details of the Black Widow costume. I hope both Barbie fans and Marvel fans alike enjoy this iconic doll from Barbie Signature.”

Fan-favorite agent-turned-hero Natasha Romanoff, also known as Black Widow, is as lethal as she is striking. At a young age, Natasha was recruited to train within the Red Room and emerged as the Black Widow. Armed with dual batons and her electric Widow’s Bite bracelets, Black Widow combines acrobatics with her expertise in various martial arts – including karate, kung fu, and judo – to accomplish her mission.

Marvel Studios’ Black Widow Barbie® Doll reflects the unwavering bravery and unstoppable determination Black Widow uses in her fight to protect the world. Sculpted to the likeness of the character and featuring sleek, fiery red hair, our doll arrives in specially designed packaging. She wears a film-inspired costume – her signature white bodysuit – complete with armored shoulders and knee-high boots. This version is a Platinum Label® doll, and will only be available at Barbie® Signature!

For additional authentic details, Marvel Studios’ Black Widow Barbie® Doll is armed with her unique weapons, including her Widow’s Bite bracelets and dual batons. A utility belt bearing the formidable red hourglass icon is the finishing touch. Shipped with a doll stand and Certificate of Authenticity, she’s the perfect gift for Marvel and Barbie® fans!

Her vast fighting skills are as deadly as the bite of a Black Widow spider, and thanks to the articulation in her arms and legs, Marvel Studios’ Black Widow Barbie® Doll is perfectly suited for powerful poses and dynamic displays, too. Now that Barbie® has captured the mystery of this hero, it’s time for YOU to take action! Don’t wait any longer – click over to the online shop now to get the Marvel Studios’ Black Widow Barbie® Doll.