First thing first I no we are a little late on this news but things have been going on behind the scenes of the site and we have now moved host’s and as you should all see the gallery has a new url with it being on this site now and not it’s own URL, I am still working things out so if something is not working right send me a email or look back later to see if I have got to it yet. But good news no more add’s

Avclub – Taika Waititi is a passionate and meticulous filmmaker, who owns a dazzling array of fruit-themed tees and rompers. To ensure his first tentpole film, Thor: Ragnarok, was a smashing success, Waititi voiced the delightful rock-monster Korg, played one of three heads on an alien, and donned a motion-capture suit to play Surtur and, occasionally, the Hulk himself. So, when the What We Do In The Shadows filmmaker announced plans to play an imaginary Hitler in his own “Nazi comedy,” Jojo Rabbit, you must have known he wasn’t going to merely play someone named Adolf Hitler.

Sure enough, in the first photo of Waititi in the role, the Hunt For The Wilderpeople director has all the Hitler accoutrements, including the mustache, swastika, and slicked-down hair.

Again, we’ll remind you that Waititi is playing an imaginary Hitler, which is presumably why Scarlett Johansson, who stars as Mrs. Betzler, is smiling in the general direction of the Nazi leader and her son Jojo, played by Roman Griffin. The film centers on young Jojo, a very lonely boy who is also not all that well-informed, as the Hitler he conjures is a “Polynesian Jew,” as Waititi himself described it. Earlier this month, Waititi underscored the fact that Jojo Rabbit is a satirical work.

To help offset the führer fuckery above, here’s another set photo, which Waititi tweeted along with some of his renowned Avengers knowledge.

Jojo Rabbit is currently in production, and there’s currently no word on a release date. 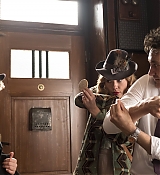 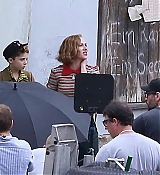 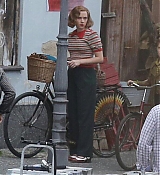 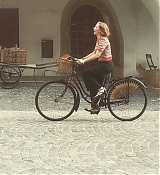