Welcome to SCARLETT JOHANSSON FAN, your online resource dedicated to the two time Oscar Nominated actress SCARLETT JOHANSSON. You may know Scarlett from her Oscar nominated roles in "JOJO RABBIT", "MARRIAGE STORY" and her 11 years as Natasha Romanoff / Black Widow in the "MARVEL CINEMATIC UNIVERSE" and her own movie "BLACK WIDOW". It is our aim to bring you all the latest news, photos, information and much more on Scarlett's career. We hope you enjoy your stay!
Abby / February 7th, 2017
Marie Claire – March 2017
Articles & Interview Gallery Updates Magazine Scans 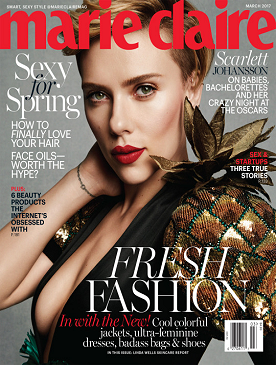 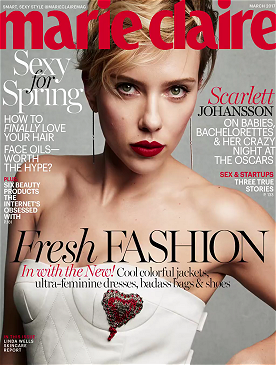 In 2015, Scarlett Johansson was presenting at the Oscars, walking the red carpet in an emerald Atelier Versace gown and a dramatic matching Swarovski necklace. But she was more concerned with another accessory. “I had to bring my breast pump, because I was nursing and every ounce is like liquid gold,” says the actress, who had given birth to her daughter, Rose, five months earlier. After the ceremony, she reunited with it in the company of mutual friends Kelly Ripa and her husband, Mark Consuelos, but not for long.

“Somehow, Mark got ahold of my breast pump—in a bag with all the milk, ice packs in there, and shit. He grabbed it out of my hand,” Johansson recalls. He was just trying to help, she explains, “but our cars got separated. Apparently, Kelly looked over, and she was like, ‘Wait a minute—is that Scarlett’s breast pump? We’ve got to get it back!’ because she knew how panicked I would be. We finally ended up at the same party three hours later, and Mark was like, ‘I’m so sorry.'”

Johansson, 32, laughs her throaty laugh and takes a sip of rooibos tea. Sitting with her in the Gotham Lounge at The Peninsula hotel in Manhattan, it’s hard not to feel a sense of kinship. Minutes ago, I was pumping in the hotel bathroom—she told her story in solidarity. “It’s very humbling,” she says of motherhood. When I absentmindedly shift around my maternity bra, she asks, “How’s your boobs? Are they square? That was always my favorite.”

For someone who has spent the past several years playing a superhero in Marvel’s Avengers franchises, Johansson is refreshingly human. “Sorry I look like such a hobo,” she says. Having just wrapped a USO tour with stops in Turkey, Qatar, and Afghanistan, the actress arrives with a stuffy nose, wearing Levi’s jeans, large-frame glasses, Adidas Superstars, and a Yankees cap. She looks more like your cool girlfriend than a movie-star goddess. But don’t be fooled: She is the latter.

Here, a few highlights from our interview, in our March issue on newsstands February 14:

On the controversy surrounding her casting as the lead in Ghost in a Shell:
“I certainly would never presume to play another race of a person. Diversity is important in Hollywood, and I would never want to feel like I was playing a character that was offensive. Also, having a franchise with a female protagonist driving it is such a rare opportunity. Certainly, I feel the enormous pressure of that—the weight of such a big property on my shoulders.”

On being reluctant to discuss the wage gap:
“Some people felt I should talk about my personal struggle in order to shed a spotlight on the greater issue. Maybe I’m being presumptuous, but I assumed it was obvious that women in all positions struggle for equality. It’s always an uphill battle and fight. My experience with my close female friends and family is that the struggle is real for everybody. Everyone has been discriminated against or harassed—sexism is real.”

On her daughter watching her in movies:
“I don’t think she’s allowed to see any of the movies I’ve made, other than Sing. I’ll be happy when she’s old enough to show her movies where I kicked some a**.”

On celebrities being vocal about politics:
“[I believe] that it is really important to hear people in various positions of power voice their opinions, their story. Why not? Why can’t I have the voice? Why can’t I use my platform? What’s the point of having it if you don’t use it? If you don’t want to get involved, please, the noise is loud enough. But if you’ve got something to say, say it.”