We now have some news and a first look at Scarlett from her upcoming second movie of this year that has as well now received a new title from “Rock Your Body” to Rough Night. Scarlett will be playing the bride to be Jess in this an R-rated comedy about a bachelorette party that has gone way wrong. The film is scheduled to premiere on June 16th in the United States. 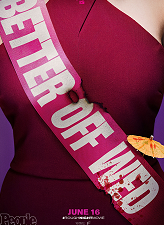 “Scarlett Johansson is a great actress — really funny,” McKinnon says. “She improvises really funny stuff and it’s really rare to find the two rolled into one. And it’s such a cool thing to watch her just work. I sort of just sit there and go, ‘Wow, look at that.’ ”

five best friends from college who reunite in Miami 10 years later for a wild bachelorette weekend. But when the partying ends up taking a dark turn and they accidentally kill a male stripper, the longtime friends are forced to put their heads together and cover up the accident.